So excited to feature in Yorkshire posts Saturday style magazine, we were interview by Stephanie Smith the Fashion and Beauty Editor who loved that we used traditional techniques to make our couture hats and the service we give to our lovely clients. 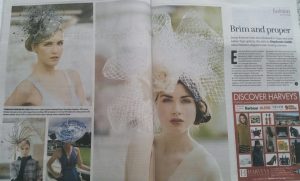 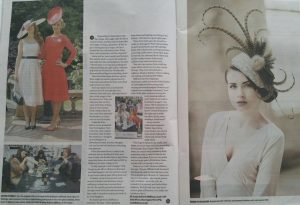 Jenny Roberts’s hats have featured in Vogue and won ladies’ days aplenty. With the Ebor Ladies’ Day this Thursday, she talks to Stephanie Smith about balance, elegance and creating winners. Every week there is another hat that Jenny Roberts and her team are desperate to make. So make it they do, and add it to the collection of beautiful headpieces for hire in the Harrogate showroom. Chloe, left, and Clementine, middle with milliner Jenny Roberts. “It might be a colour that someone has come in with, or a fashion colour. It might be a material I want to make a hat with, or it might be just because,” Jenny says. Jenny Roberts Millinery has become the go-to for mothers of the bride who want to wow wedding guests with statement elegance, and for race-goers who would like have a good stab at winning a ladies’ day parade. With clients across the UK and the world, Jenny and co have been busy for Ebor Ladies’ Day this Thursday. One customer won a Mini Coupe at Cheltenham. Typically, a mother of the bride or race-goer will make an appointment. “We’ll tell them to bring their outfit and any accessories they might have and they get changed in the changing room,” says Jenny. “We have a chat about any preconceived ideas they might have, what type of wedding it is, how they want to come across. They might be very nervous and overwhelmed by it, they might want to be hidden behind a little veil.“Depending on their stature and face shape, they might want the hat to enhance them, so if they want to look taller and longer, we’ll go asymmetric. If they’ve got a rectangular face shape, we’ll do a shaped hat that will balance that. If they have a very round face, we’ll do a big trim.” The hat Jenny created for Spode. Jenny and her team usually need between four and six weeks to source the materials and make the hats and headpieces. She says: “There’s loads more than just plucking out a hat and finding the right colour. A hat can help with the overall look. We help style them as well and figure out handbag, shoes.”Once the initial shape has been agreed, there might be another appointment to make decisions about the trim, and a final appointment to collect. Each hat represents an exceptional amount of work and typically costs between £200 and £425, although there is also a wide range to hire for around £70. They can make just four or five a week with three of them full at it. The wooden blocks used to form the hats come from specialist blockmakers in Luton and can cost £300-plus.Originally from Bolton, Jenny graduated from Nottingham Trent University with a degree in Fashion with Textiles. She worked as a designer on the Designers at Debenhams brand, but then changed tack and moved into business technology management. The Bolliger advertisement created from a photograph of two race-goers wearing Jenny Roberts Millinery hats. When she moved from London to be with her now ex-husband in 2003, and have a baby, she decided that, as part of her maternity leave, she would take an HNC in Millinery at Leeds College of Art.“I really enjoyed it and I thought: ‘Well, I’ve got a year off, so I’ll give it a shot and see what happens’. So I set up from a room in my house making hats, hiring them out.” Probably owing to her proven track record in fashion and business, Jenny’s millinery venture was a success from the off. She quickly gained commissions through word of mouth and was sewing hats while in hospital awaiting the birth of her first daughter.“It’s hard to go from a hobby to a business,” she says. “I was operating from home and making everything in the kitchen. I did that for a good eight years.” The original outfits that inspired the Bollinger advert. Then, three years ago, she moved to a studio on Harrogate’s West Park and then in April into premises just off Cold Bath Road, with a showroom on the ground floor and a large studio above, the perfect space for herself, her assistant Marie Halewood, and the steady stream of placement students they teach and work with.They also run courses, from a half-day taster which costs £75 to two-day courses for £195. They cover introduction to millinery, fabulous feathers, flower-making, veil making, and making felt trilbies. Millinery has been enjoying a renaissance, partly as a result of the Duchess of Cambridge and other young royals wearing directional headgear (Beatrice and Eugenie have not always impressed). “Even some of the older royals are wearing the most amazing millinery and I think we are ready to be dressed up again,” says Jenny. “We’ve had years of being quite casual and now there’s a sense of occasion. It’s really nice to make the effort, for the races, weddings, investitures.” Jenny aims for understated elegance. “Rather than throw everything at one hat, it’s more about making the whole look of somebody really shine.“You’ve got to balance your outfit, your shape, your face shape and your personality. For example, if you’ve got a Dior-style dress, you need to wear something that’s reasonably wide in order to balance the bottom of the dress. If you are very petite and you’ve got quite a fitted dress, then a massive hat is just going to wear you.”There is no rivalry between milliners, she says. “We are affiliated with Stockport Hat Museum, and we meet up once a year. We’re all quite good friends. St Catherine’s Day is in November – she was the patron saint of hatters – so on the 25th, we normally do a tea party and invite fellow milliners. We’ll sit with our cake stand and our glass of Prosecco. 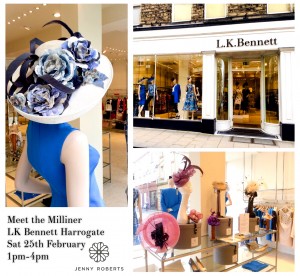 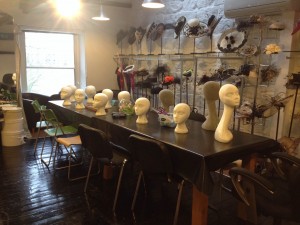